Invasion of the Roach People, The Story of Failed Desegregation in Dallas: A Sociological Chronicle of Two Cultures in Conflict 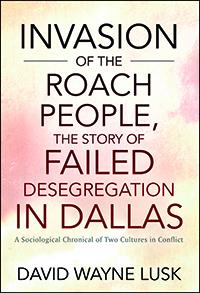 (EMAILWIRE.COM, October 11, 2022 ) Denver, CO and Dallas, TX  Outskirts Pressthe fastest-growing,
full-service self-publishing and book marketing companyis pleased to announce the release of new non-fiction by David Wayne Lusk: Invasion of the Roach People, The Story of Failed Desegregation in Dallas: A Sociological Chronicle of Two Cultures in Conflict.
David Lusk expected black teenagers born after the Civil Rights Act of 1964 to be
kinder and gentler toward the white race. Instead he found them to be sullen,
angry and racially enraged. Economically trapped in south Dallas for sixty years,
David witnessed the areas economic collapse in the 1980s due to white flight;
during which the City of Dallas became the crime capital of the United States! He
then saw most of the city transformed as black people merged into other sectors of
the city, and black teens vented their anger at White holdouts who couldn’t afford
to leave.

David was then harassed by a massive black conspiracy of adults because he was a white man jogging in a black neighborhood! Executive Airport was used to harass him with aircraft for twenty year; during which black pilots flying helicopters for the Dallas Police and Air National Guard became involved. David finally brought the FBI into the case, which eventually stopped the involvement of Dallas Police and Air National Guard.

Invasion of the Roach People, The Story of Failed Desegregation in Dallas tells this incredible story, and offers hope that one day Whites and Blacks will coexist in harmony.

Learn more about the author at outskirtspress/InvasionOfTheRoachPeople.

At 264 pages, Invasion of the Roach People is available online through Outskirts Press. It is also sold through Amazon and Barnes and Noble for a maximum trade discount in quantities of 10 or more and is being aggressively promoted to appropriate markets with a focus on the non-fiction and social commentary categories.

About Outskirts Press, Inc.: Outskirts Press offers full-service, custom self-publishing and book marketing services for authors seeking a cost-effective, fast, and flexible way to publish and distribute their books worldwide while retaining all their rights and full creative control. Available for authors globally at www.outskirtspress.com and located on the outskirts of Denver, Colorado, Outskirts Press, Inc. represents the future of book publishing, today.

Dental Laboratories Market worth $46.5 billion by 2027

(EMAILWIRE.COM, December 02, 2022 ) Hong Kong -- Holapick, one of the most reputed fashion stores online has recently launched...

(EMAILWIRE.COM, December 02, 2022 ) Hong Kong -- The annual clearance sale for Berrylook is slated to begin in the...

No Result
View All Result