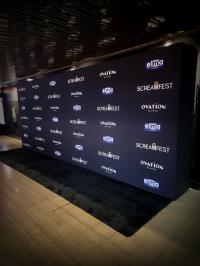 (EMAILWIRE.COM, October 14, 2022 ) Hollywood, CA – Just in time for Halloween, Screamfest, referred to by some as The Sundance of Horror, is back for its 21st year in a row, bringing along with it new frightening films as part of this years lineup. The festival will run from the evening of October the 11th through October the 20th at the iconic TCL Chinese Theatre in Hollywood!

Step and Repeat LA has been providing high quality Media Walls for Screamfest for many years, and this year was called in once more to put together an 8 tall by 20 wide press wall to serve as the photo op backdrop for the festival. Made up of a series of wooden set flats, the wall features a seamless fabric print – created using eco-friendly water-based ink on a matte-finished fabric – that is stretched onto the frontside of the wooden structure. Once raised up and secured in place, Step and Repeat LA then rolled out a plush black carpet to give just the right ghoulish touch and a welcoming alternative to the traditional red carpet experience!

The festival was originally formed in 2001 by Rachel Belofsky and Ross Martin, both film producers, who aimed at providing a warm venue for filmmakers and screenwriters of the horror genre to showcase their latest work. Countless films have been discovered and have earned worldwide distribution just by being part of this annual event, including the box office smash, Paranormal Activity, which went on to earn almost $200 million worldwide in 2009!

Tickets and Festival Badges Screamfest 2022 are now available online through the festival’s website.

From movie premieres to private birthday parties, Step and Repeat LA has been creating backdrops for countless events for nearly 15 years. The company provides top-notch sales executives to handle every detail, a cutting-edge design team that can create custom-designed layouts, as well as in-house printing, production, and quality check. Delivery, setup and take-down services are also available and are done by Step and Repeat LAs experienced crew. And with 24-hour turnaround capability, its no wonder Step and Repeat LA has become The City of Angels premiere red carpet backdrop company!

Bioink Market is expected to grow at a CAGR of 20.48 percent during the forecast period

(EMAILWIRE.COM, January 27, 2023 ) As per the Maximize Market research, a global business and consultancy firm, the global Bioink...

Methyl Palmitate Market is expected to grow at a CAGR of 5.2 percent during the forecast period

(EMAILWIRE.COM, January 27, 2023 ) As per the Maximize Market research, a global business and consultancy firm, the global Methyl...

Bio-based Polyurethane Foam Market is expected to grow at a CAGR of 5.9 percent during the forecast period.

(EMAILWIRE.COM, January 27, 2023 ) As per the Maximize Market research, a global business and consultancy firm, the global Bio-based...

No Result
View All Result